I like that Evernote lets you share notes and notebooks and in fact I use this functionality within Fanatic Software all the time to share plans and thoughts to the rest of the team in a coordinated way. I’m not a huge fan of the Evernote interface and in general don’t like their editor. So for me, it really comes down to using Evernote as my “backend” notes service. 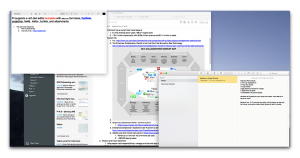 Apple Notes has iCloud though which is actually become a fantastic backend – except that they still don’t offer any real sharing features (its a one and done deal), is not cross-platform, and has no ability for apps like Informant to access the data. This last part is a key thing for me.

Apple has given us decent access to Contacts, Reminders, and Calendar events – but not notes. Why not? In 9 years Apple has deemed it appropriate to give us 2 revisions of a Contacts API and one revision of Reminders/Calendars – but nothing for notes. I’ve asked them directly and they want to know why anyone would want it. I tell them we get requests for Apple Notes integration every week; however its my word against the reality that they don’t see many developers asking them for this.

I also wonder with the next Mac version of Notes being able to import Evernote notes – how many people might drop Evernote to move to Apple Notes? There are some clear benefits: sync in the background on iOS and OS X, no limit to data in general (iCloud doesn’t count the calendar/Reminder/Notes data against iCloud data storage as far as I know), and a pretty fantastic editor at this time. Evernote has a couple benefits too: not tied to Apple so its cross-platform, sharing notebooks, tagging, and a host of features that frankly I don’t think many people use.

So here is my question – would you have any real interest in Informant being able to access Apple notes directly? Let us know. We will share that with some of our friends at Apple.